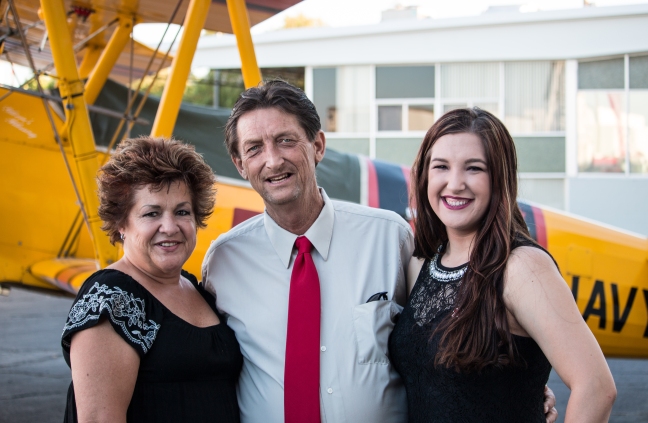 Taylor pictured with her parents, Jan and Jack Poisall, at the Heroes for the American Red Cross event in 2016.

My dad, Jack Poisall, didn’t speak a lot about his experience in the Army, but he would reminisce on jumping out of planes and his dog Fairbanks, named after where he was stationed in Alaska. He often joked about the regrettable tattoo he got with his fellow soldiers but would say so with a cheeky grin.

My strong and silly dad suffered a stroke in August 2012, and it changed my family’s life forever. My mom would become his full-time caregiver, and my brother and I would visit my dad in the hospital between college classes and part-time jobs. We would watch HGTV shows and the show Chopped to pass the time between nurses and doctors checking on him and meal times.

Even though he didn’t open up much about his experience in the military, at the end of his life he was able to receive care at the Fresno VA Hospital. He had only been there a few days when I walked up to the entrance and saw Red Cross volunteers. I had just joined the Red Cross as a staff member after volunteering in college, so it was extra special to see some familiar faces when I walked up. Service to the Armed Forces (SAF) volunteers were there that day to pass out homemade Valentine’s Day cards to veterans and their families, and this time I was on the receiving end of Red Cross services.

It meant more to my family than they ever knew as the holiday had snuck upon us. We were able to share the thoughtful cards with my dad before he passed just two days later.

Following the event, my colleague Marcella Franklin, our then SAF Manager, dedicated the Valentines for Vets event to him in his honor which stated, “Mr. Poisall was an American Soldier who took up arms and fought for his country, and who later faced health challenges and fought for his family for many years; he did both out of heroic and unconditional love for those who carry him now forever in their hearts.” Those kind words remain close to my heart four years later.

Of course, this was a big moment for me and my family, but there are other smaller moments of Red Crossers being there for one another and their fellow neighbor. They show up and give compassion to their community, often strangers, when they are hurting and in times of crisis. They also celebrate the small wins as people recover from disasters. I am lucky I get to experience these small moments every day at the Red Cross.

My dad was proud of the career path I had found myself in. After years of seeing people help others during their time of need, the Red Cross felt like home to me. In my time here, I have since gotten to hear hundreds of Red Cross volunteers share their mission moments and this story is one of mine.

There’s so much that goes into being a caregiver for a family member, and I wish I knew then about the services the Red Cross Military Veteran Caregiver Network provides, such as offering caregivers peer mentors, peer support groups, an online community as well as mental health, wellness and resiliency workshops. My family was lucky to have friends and family in our corner supporting us, but I find myself grateful there is a dedicated network of support there for others.

I encourage you to look into the resources the Red Cross has to offer, become a volunteer or donor, or find your way to inspire others to give back in your community. You can start at redcross.org.

November is National Veteran & Military Families Month, and the American Red Cross honors veterans and recognizes the special role veteran caregivers play in support of wounded or injured veterans. A caregiver is a family member, friend, or acquaintance who provides care and assistance for a former military service member, helping with a wide range of both physical and mental illnesses and injuries.

One thought on “A Token of Kindness”