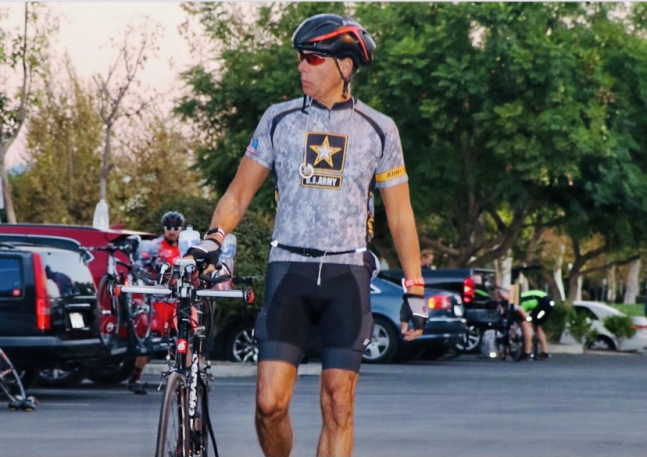 Rick Lopez is not letting COVID-19 stop him from participating in Ride for the Red, the American Red Cross’ fundraising event benefiting Service to the Armed Forces. The event returns on November 13.

“I’m riding to pay tribute to those who had to go to war,” said Rick, an Army veteran himself. “I never had to go to war while in the service, but I’m doing this for the military veterans in Ventura County who were in wars, including those who served and fought for us over the last 20 years.”

Rick Lopez with his ride, “Leroy Jr.,” at a previous Red Cross Ride for the Red event

Until he spent a week in the hospital for COVID-19 in late December and early this year, Rick, 61, was active in endurance sports, including Iron Man and triathlon events. “I used to feel like I could run a marathon just getting out of bed in the morning, and in fact I’ve done that a few times,” he said.

“I was thinking, am I going to die in the hospital?” he recalled. “I’ll tell you, my doctor said I probably would have died if it wasn’t for the fact that I was in great physical condition. When I got back home, I couldn’t walk across my backyard without stopping”

Rick has been steadily working his way back to fitness. He has participated in previous Ride for the Red events, but he plans on ratcheting down his effort from his previous 100-mile rides to the 62-mile course. The event was not held in 2020 due to the pandemic.

Rick said he’ll be riding his trusty triathlon bike, which he calls “Leroy Jr.,” a Cervello P2. “You got to name your ride,” he said. “I’ll also be wearing my Army cycling jersey.”

Rick takes a selfie during his recent biking vacation

Rick said he is now retired, “after 38 years of adult work.” He was able to get one of his former employers, AeroVironment, to be a Ride for the Red sponsor.

After graduating from Cal State Fullerton, Rick first pursued law school, but he had a change of heart after talking to a friend in the service. “I asked myself, ‘Do I really want to be a lawyer?’ Heck no. I want to jump out of airplanes and do that other fun stuff.” Rick served a total of six years in the Army, including four years at Fort Lewis in Washington state, now known as Joint Base Lewis-McChord.

Rick, a resident of Camarillo, has been married to Julie for 40 years. Rick and Julie have two children and two grandchildren.

Rick’s mother and father were both Navy veterans. His mother was one of the original members of the WAVES (Women Accepted for Volunteer Emergency Service), established in 1942.

Rick said he values the work done by the Red Cross’ Service to the Armed Forces. “Back in 1984, the Red Cross helped with a medical issue involving my dad,” he said “They do a great job. Ride for the Red is a wonderful event and a great way for me to give back to the Red Cross.”

Red for the Red

Join the Red Cross for an amazing cycling event that takes riders through beautiful Ventura County. Contact us to learn more about how you or your organization can participate and support this noble cause. Sponsorship opportunities are also available for this one of a kind event.