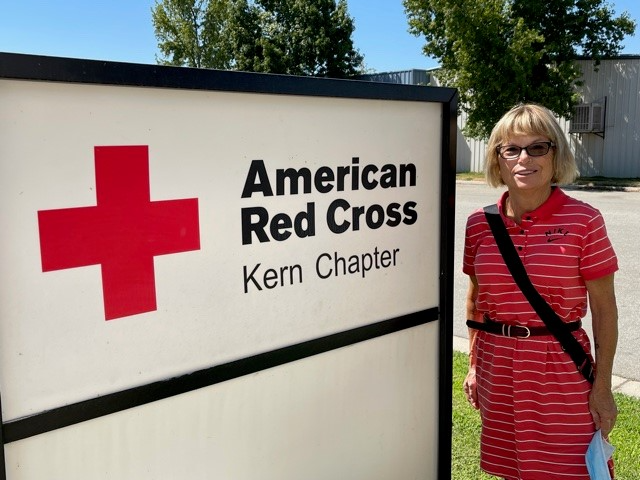 In 1979, Madeleine Dircks was just out of high school in Southern California and the song “In the Navy” by the Village People seemed to be on the radio all the time.

“The boys on the Village People had the cutest outfits,” Dircks recalled. “It sounds kind of silly, but that’s what led to my interest in the Navy.”

These days, Dircks’ experience in the U.S. Navy enhances her efforts as a volunteer with the American Red Cross, where she is a caseworker in the Service to the Armed Forces (SAF) program. Dircks contacts service members to assure them that the Red Cross will be there if they or their families need help. The SAF provides a variety of programs and services to military members and their families, deployed domestically and overseas, as well as veterans and their families.

Dircks served nine years in the Navy. She wasn’t assigned to duty at sea, but was stationed in London, England, and Jacksonville, Fla., winding up as a petty officer first class.

“I was pregnant with my first son when a commanding officer looked at me and said: ‘Your first-born is mine,’” she said. “And it’s funny, but he’s in the Navy, as is one of my other sons.” She transitioned to civilian life while pregnant with her second son.

In fact, the Navy is a common theme for Dircks and her extended family. She met her late husband of 32 years, Gregory Dircks, while both were on duty in London. Along with her two sons, one daughter-in-law is also in the Navy. Two of her daughters-in-law also each have a brother in the Navy. Dircks also has a third adult son who lives in Bakersfield.

Dircks, who lives in Kern County, recently retired from the Kern Regional Center as a caseworker for people with developmental disabilities.

Upon retirement, she found she had plenty of time on her hands. “There’s only so much time I can spend working out and watching Netflix and buying stuff on Amazon,” she said.

“I felt I needed a purpose. I was looking for volunteer opportunities, but because of COVID-19 no one was taking on new people.”

Jennifer Faux, the regional program manager for SAF, said Dircks “has brought much enthusiasm to her role as a Contact Card Volunteer.”

“She provides a heartfelt, calm, reassuring voice at the end of the line to ensure that they know the Red Cross is there for them and their service member,” Faux said. “Although Maddie has only been on the SAF team for a short while, she has made a huge impact, and we are grateful to have her here.”

Dircks, who has been a Red Cross volunteer for about five months, came across the organization on the internet. “They were welcoming and it was a good fit,” she said. “I’m a Navy mom myself, and helping people in the armed services is my passion.”

“IN THE NAVY”: Madeleine Dircks is shown in October 1979 with her step-father, Marcos Franco, after she graduated from boot camp and prior to her first duty station in London, England