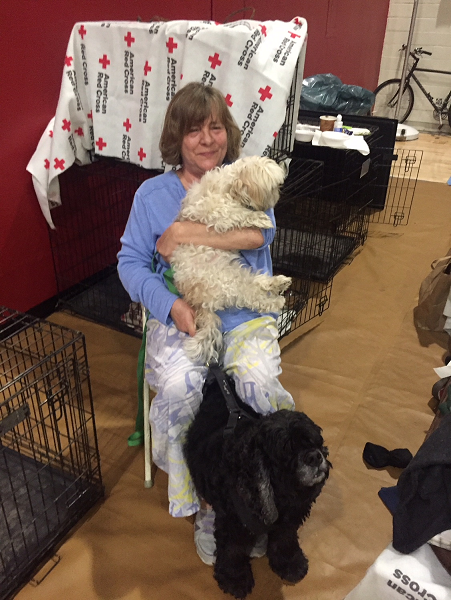 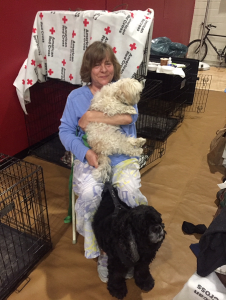 Hannah Troy of Montecito has stayed in two Red Cross shelters during two separate natural disasters that struck over a five-week period. She was evacuated twice during the Thomas Fire, the largest in California’s history. During her first mandatory evacuation she spent two days at the Red Cross shelter on the University of California, Santa Barbara (UCSB) campus, and later stayed with a friend for 12 days over the holidays.

Her return home proved to be brief when she woke up to the sound of heavy rain and a mudslide evacuation alert on her phone at 3:30 a.m. on Tuesday, January 9. She ran out to where her minivan had been parked, but it was no longer there. Her brother-in-law’s car was also swept away. The road clearly wasn’t safe to drive, so she went back inside her home and waited with her sister and brother-in-law, with whom she lives.

When they had learned the day before that their home was in a voluntary evacuation area, Hannah had packed her car with a bag with clothes and supplies for a few days in case they needed to evacuate again. Those belongings were gone in a wave of mud.

After being rescued from her home, Hannah was relieved to see the Red Cross shelter open at Santa Barbara City College (SBCC). Having trudged through thick mud with her family and dogs, she was glad to have a hot shower and fresh clothes because she couldn’t carry many belongings with her through the mud.

“You won’t find a bigger fan of the Red Cross than me,” she said.

The Red Cross has been providing shelter and other services for people impacted by the mudslides.

The area of mandatory evacuation expanded to clear the area for recovery efforts and more than 29,000 people were ordered to leave for what might be another week. People who arrived at the shelter were offered food, a place to sleep, mental health services, help reaching loved ones and access to hot showers and clean clothes.

Hannah stayed at the SBCC Red Cross Shelter with her dogs Lulu and Gabriel for a week, while she planned her next steps for a long-term recovery. She praised the Red Cross volunteers as giving her a sense of security after going through two natural disasters.

“There are all these amazing people and I feel safe,” said Hannah with her arms extended pointing toward Red Cross volunteers. “I just feel like this is the smartest place for me to be right now.”

Earlier this week, Hannah decided to stay with her aunt, but she promised to keep in touch with people she had gotten to know at the shelter.

If you’re interested in volunteering with the Red Cross, visit http://www.redcross.org. You can also donate to the Red Cross at the same website, by calling 1-800-REDCROSS or texting REDCROSS to 90999 to make a $10 donation.