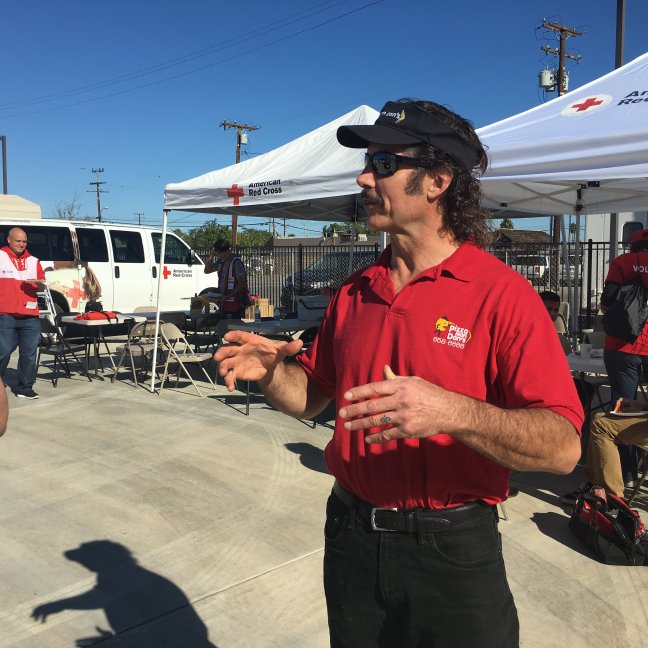 When Dan realized the goal of the event he felt compelled to help. Collier described how he became familiar with the American Red Cross, and the lifesaving work that we provide.  Collier explained that he found out about the Red Cross after losing his brother in-law to a home fire in New York two months prior.  Collier said the fire started while he was asleep, and that his life could have been saved if the smoke alarm in his home had been connected.  Collier said when he was approached by the Red Cross to assist with the event he jumped at the opportunity.

“When I heard the goal of yours was to install 400-500 smoke alarms in one day here in Oxnard it was not only great timing, but I wanted to do what I could to help spread awareness to people that were as unfamiliar with the work of the Red Cross as I was.  I am impressed with the work that the American Red Cross is doing, and all the volunteers that have dedicated their whole Saturday.  The least I can do is provide lunch for them.”

Dan also mentioned that the American Red Cross was the first and the only organization that arrived at the scene of the fire of his brother in law’s home before it was out. He explained that they offered everything they said they would. He praised the program for carrying out the same services in New York as well as in California. The volunteers offered emotional, financial, and other visible support when his family needed it most.

This event turned out to be a huge success.  Red Cross volunteers managed to install 518 smoke alarms, educate 676 residents, and create 278 safety plans for families in the event of a disaster.

Collier returned three months later to provide lunch for volunteers and provide vouchers for pizza to families at the Camarillo Home Fire Campaign on April 8, 2017.  On this occasion, community volunteers managed to cover 53 homes, install 158 smoke alarms, and educate 212 residents.

Dan Collier may not have heard much about the American Red Cross prior to his family’s unfortunate loss, but he has continued to show his support and help families potentially avoid such an accident.  Like many others in the region, Dan may not have heard much about the Red Cross prior to his unfortunate incident, but now that he has experienced the importance of home fire safety first hand, he is committed to making sure no one else must go through the same tragic experience.

Next Saturday the American Red Cross of Ventura County will host another Home Fire Campaign in Port Hueneme, California.  Once again Pizza Man Dan will be supporting our volunteers with lunch, and participating families with vouchers.  Sign up to volunteer here: http://www.redcross.org/local/california/central-california/home-fire-safety