When it rains it pours, and it has certainly been pouring in California this winter. Massive amounts of rainfall in the Golden State has caused flooding, landslides, sink holes, road closures, power outages, and mass evacuations. All of this has led to a major Red Cross response effort, with volunteers from around the nation pouring into our state to provide relief.

Oroville Dam Spillway
Last Sunday night nearly 200,000 residents were told that the Oroville Dam Spillway failure was imminent, and they had only an hour to leave home. Within just a few hours, the Red Cross Gold Country Region managed to set up multiple emergency shelters to house thousands of residents fleeing the threat of the dam.

Two-year-old Samantha started running a fever at the shelter, and disaster health workers helped prescribe medicine and even picked up the prescription for the family at the local pharmacy. Photo: Marko Kokic, American Red Cross 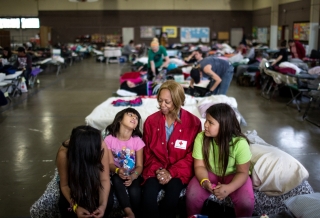 By Monday afternoon, 12 local Central California Red Crossers were on their way to the operational headquarters in Sacramento to help provide relief and comfort. Their support ranged from shelter staff, public information officers, and Emergency Response Vehicle drivers.

California Flooding
Meanwhile, more rain was on the way and all eyes were on the atmospheric river slowly churning over the Pacific Ocean. The Central California Region quickly teamed up with the neighboring regions and Red Cross National Headquarters to formulate a plan for supporting multiple communities that would be impacted by this new storm all at once.

Friday night, our local Red Cross activated five emergency shelters for families looking to avoid the storm’s wrath. Many more shelters were placed on standby just in case. Red Cross volunteers worked through the night, making sure that anyone who needed assistance was supported.

The winter weather still isn’t over. With more rain on the way, it’s more important than ever to make sure that your family is ready for disasters big and small. There are three simple steps that everyone can take to help make a difference: get a kit, make a plan, be informed.

Follow a few flood safety tips to prepare for and respond to flooding in your area:

The Red Cross will always be there for our community in times of disaster. But by following a few simple steps to make sure your family is ready, you’re helping us to build a stronger, more resilient Central California – come rain or shine.