Close your eyes and image…

It’s a cold winter night with temperatures dropping below freezing. You and your family are huddled together for warmth along with hundreds of other refugees. Outside you can hear the buzzing of disaster responders working feverishly to secure the area. Other families are sharing an open flame out on the sidewalk for warmth and cooking. There’s no hot water for cleaning or showering.

You’re not in a foreign country or war zone. You’re in an apartment complex in Fresno, California.

This is the reality that hundreds of local Southeast Asian refugee families are currently facing since the gas was shut off on November 12th due to safety concerns. It’s not a typical natural disaster – it’s manmade, due to neglect. But the City of Fresno called in the local Red Cross to help.

The Red Cross distributed nearly 1,000 blankets to the residents, and helped establish partnerships with other non-profits like FIRM and the Southern Baptist Convention to provide warm meals and hot showers. In disasters natural or manmade, community partnerships are critical.

profits, first responders, and local government agencies so that when disaster does strike, we’re ready to respond quickly as a unified team,” said Red Cross Executive Director Barry Falke, “When hundreds or thousands of lives are at risk, not one organization can do it alone. We have to build partnerships before disaster strikes.”

It’s one of the many behind the scenes roles that the Red Cross often plays. The organization often acts as the central nervous system between multiple agencies like the City of Fresno and the Southern Baptist Convention and helps to organize workshops, meetings, networking, and training opportunities for local disaster response groups.

But disaster preparedness doesn’t stop there. The Red Cross recognizes that every family needs to be prepared for emergencies. 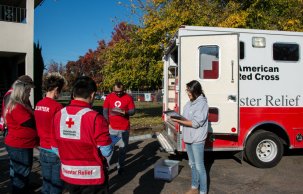 When the Red Cross and City officials got a closer look at the refugee apartment complex, they realized a big problem. Many of these units did not have working smoke alarms or carbon monoxide detectors. With many families using space heaters, open flames, or other non-traditional heat sources, this was a recipe for disaster. The Red Cross immediately took action, installing more than 150 free smoke alarms and carbon monoxide detectors for the residents alongside community partners, translators, and first responders.

The Red Cross is only able to prepare for disasters and educate local families on the importance of emergency preparedness thanks to the generosity of the community. Through your donations, Red Cross disaster teams are able to work 24 hours a day, 7 days a week, 365 days a year to build a stronger, more resilient Central California.

The holiday season is a time for family, reflection, and generosity. Every year people all over the world come together for the global social media event that has become known as Giving Tuesday. After the holiday shopping rush of Black Friday or Cyber Monday fades away, Giving Tuesday is an opportunity to bring people together and celebrate the non-profits that serve our communities.