The day was April 18, 2015 in Merced, CA. Alyssa Aviles watched as American Red Cross volunteers came into the National Guard facility ready to install smoke alarms and carbon monoxide into the Merced homes. Each person had a smile on their face and was anxious to get started on the project at hand.

Alyssa is not a regular Red Cross volunteer. In fact, she is a Fresno State student, who is working on a service learning project for her marketing class along with two classmates. She and her group members found that Red Cross’s values were in line with their own views and were eager to help out in Home Fire Campaign.

Alyssa and her classmates were put on teams and set out for the day.  She soon learned that asking people to open up their homes was no easy task. Alyssa said, “Some people think this was too good to be true, which is why they are reluctant to let us into their homes.”

Even though Alyssa’s team experienced some resistance, there were quite a few homeowners that allowed the volunteers to enter their homes.  Alyssa’s team approached a home where the homeowner only looked at the vests and shirts of the volunteers and knew Red Cross was there to help in some way. She gladly called out to the volunteers and said in a high-spirited voice, “Come on in, don’t be afraid!” The team then explained to the homeowner about the free smoke alarm and the woman was even more welcoming. She said, “It’s wonderful, Red Cross is generous for doing this for me. Thank you.”

There were a lot more homes just like this who were just overjoyed with the fact that Red Cross was able to not only giving away free smoke alarms but were also installing them on the spot. One homeowner said, “It feels good that you’re out here, my father died in a home fire, shows the people care.” 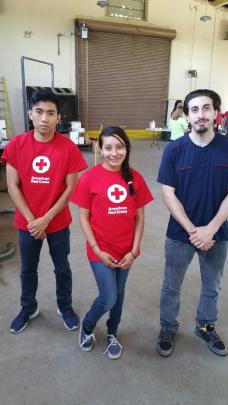 Alyssa asked one homeowner, who was without a smoke alarm for 47 years, if she was ever afraid of a home fire and the homeowner said, “Lately, I’ve been kind of leery about it, I have a fire place, and sometimes I wonder things happen, and I kept praying hoping nothing happens.”

Alyssa also had a few things to say about the day, “I’ve never been a part of something that would benefit families and possibly save them from any future fires. I feel with this campaign I am making a difference and that makes me proud to be a part of the American Red Cross team” She went on to say, “Red Cross really cares for people in need, I never knew that so many people lived without smoke alarms or didn’t know what a carbon monoxide alarm is. Red Cross can not only install these alarms, but educate the people in case of a fire, and that is what I consider priceless.”