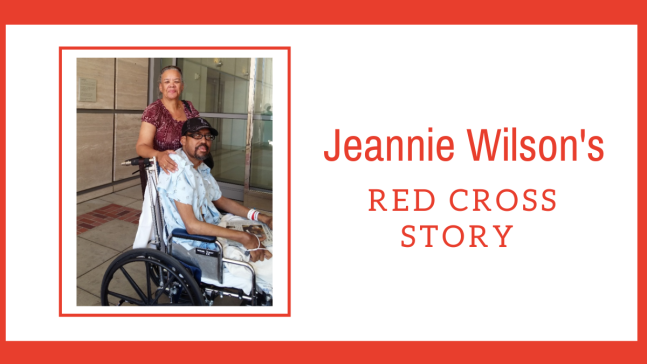 Sometimes, you’re simply at the right place at the right time. For American Red Cross volunteer Jeannie Wilson, it was the moment that she pulled into the parking lot of her local Red Cross chapter in January 2017. It wasn’t the trip she was expecting to make, but after more than 13 years of watching her son suffer from an incurable disease, it is the path that brought her here.

“You never expect to bury your children before you,” Wilson shared softly. “It seems so long to me, but to retell it seems so short. It was a long 13 years of him being sick.”

Traveling to all the top medical institutions throughout California, Jeannie was sleeping in hospital rooms and her van to be alongside her son, all while running a successful church with her husband. Her life consisted of daily commutes that brought hours of travel to care for her son. Dropping everything she was doing to be with him, each of the 18 times he was placed on life support.

Jeannie recalls the last trip she took, “My son fought such a hard fight and those last days were beyond what any mother could do and our only hope was in God,” she said. “He let me know he was hurting. His heart was stopping. I began to tell him that it was okay for him to go.” Doctors once again rushed in to resuscitate him, but this time Jeannie told doctors to let him go. His time had finally come… he was at peace.

She spent the year following her son’s passing pushing through the pain and filling the emptiness. Jeannie’s priority was to stay busy. A few short months after losing her son, her brother passed away. Jeannie was defeated. She was done.

While running errands one day, she passed a sign for her local Red Cross chapter and all of the sudden without even thinking she was turning into the parking lot. She says it was akin to being on autopilot.  She parked her car without thinking, got out and walked right into the chapter where she was greeted by a friendly Red Cross smile. The question that came to her was simply, “Do you need volunteers?”

“That literally saved my life,” Wilson said. “I would have never thought of the Red Cross. I haven’t left and I’m not going anywhere. This is probably the best medicine that you can ever get. We’re all going to go through something at a certain time in our life. For me this was mine. It was worth every minute.”

Today, in her role at the Red Cross, Jeannie is a regional lead for Disaster Spiritual Care and a trainer for the Be Red Cross Ready program. As an advocate in the community, she is passionate for helping senior citizens. Whether it’s going to meetings at senior centers throughout her neighborhood or meeting with them at community events, Jeannie shares a warm smile and purposeful preparedness education. Growing up on a farm, Jeannie was always taught the importance of giving back to others.

“We all face emergencies and we have all been through something,” Wilson said. “Put yourself in the place of someone that is in need. What do you have or what can you help them with financially? We give financial assistance to help families get the resources they need, not the resources we think they need. We tend to think that people can use our hand me downs, but they need financial assistance, a comforting voice and someone to talk to about their emotions.”

After being called to assist as on-scene support for large home fires throughout Central California, Jeannie knows first-hand the devastation home fires can cause after watching her parent’s home burn. She often reflects on the Red Cross and how they came to help, not knowing that it was one of the primary roles of the Red Cross.

“This is my story and I’m never leaving.”

“You never know what tomorrow is going to bring,” Wilson said. “Even with obstacles, you can overcome. The Red Cross means a lot to me, it really does. A passion that might be hard for others to understand, but because of the life I have had, being a volunteer really gives you that power to feel, understand, and hear from those who are suffering.”